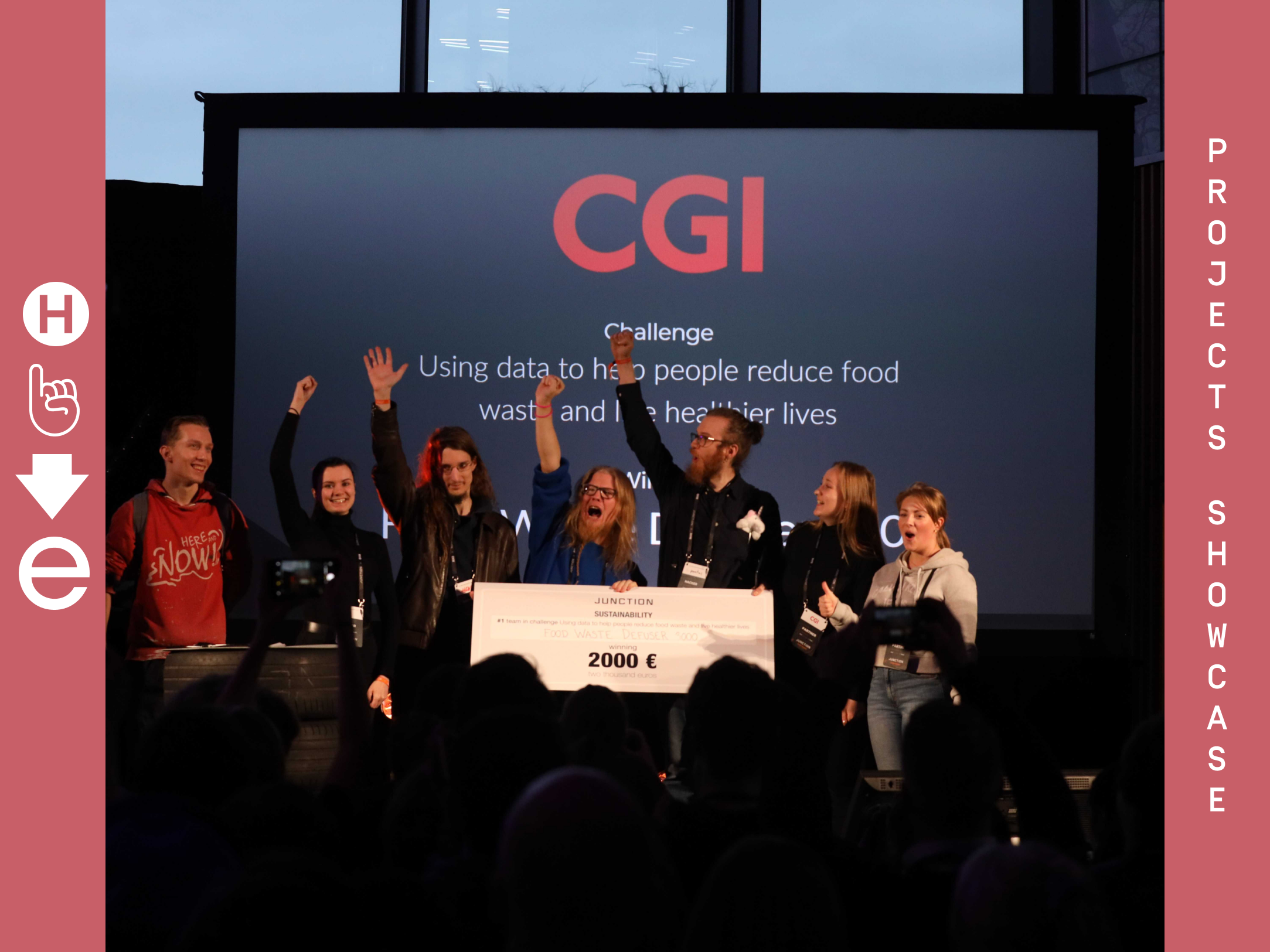 Why you are not ready, and why it doesn’t really matter - experiences from Junction 2019 of the Food Waste Defuser 3000 team

This is a reflection on what happened to us as a result of the piscine at Hive Helsinki, and the story about how five novice coders went to Junction 2019, Europe’s largest hackathon, in November 2019 … and won the most popular challenge track Junction has ever had until that date, with over 50 teams competing.

We, for I was one of these novices, won on a concept of an app---the Food Waste Defuser 3000---that would help shoppers reduce their food waste. This would be accomplished by gamifying their grocery items as bombs with countdowns that you had to disarm in order to render into game score and bonus points with your customer loyalty program. That is the elevator pitch; I could go on about this idea in more detail, but it is not strictly relevant to how we arrived at success at the hackathon, so I actually won’t. This is really about whether it matters if you are ever ready. This is about how none of it would have happened at all had I not been pulled out of my chair in the cluster by a friend during the piscine in August. This friend dragged me to the library to a meeting about something crazy---that a bunch of us, greener than grass and twice as fresh, should sign up for a real hackathon and ‘see how far we could get’. Pretty far, as it turns out.

I will not write so much about our project---the idea that caught the eyes of the partner companies---but more about how we arrived at it, and how Hive and the piscine empowered us to explore our way there. This is not a roadmap, but an account of how lost you can be before you realise what you have been given, in our case by the experience that was the piscine at Hive Helsinki.

Problems along the way: “Have team, will travel”

There were some stumble blocks along the way. The first matter was the team. How do you even build a team? I did not feel that I knew anyone in the room very well, but I wrote down my name on a couple of lists. Some kind soul---thank you!---sorted the lists and encouraged people to get in touch. I ended up having coffee in town with a group of us interested in the Sustainability track after the piscine---all of us still dazed by the experience---trying to condense the list into two teams. One leader for each, a strong coder, a person with social work experience, a ‘support coder’, and so on, we made sure that the teams had diverse compositions and did not needlessly overlap. Over an hour of coffee, it became clearer, and we prepared to submit our applications, promising to do so well in time for the deadline. There is another story of how not to do it here, involving me sitting at a computer 30 minutes before a deadline and rushing to fill out a form, but we did get accepted as a team to Junction 2019 in the end. After that, school started, and we lost ourselves in studies and everything else that was going on in our lives.

We arrived at Junction in Espoo on a November Friday, separately and a bit bewildered. I distinctly remember feeling unready and like I did not have any business going to a real tech event at this point in my studies. Still, after some confusion, we found a space to sit and got to work on brainstorming our idea. It was all a bit intimidating for someone not used to the tech world; everyone knew more than us, and spoke the language of the hackathon. Myself, I had a hard time comprehending the generous free snack bar. No one had ever given me unlimited free snacks for just showing up somewhere (I studied humanities at university).

We spend a whole day and night working on our idea, and then, on Saturday, we thought it would be a good idea to have a halftime talk with the partner company representatives on the floor. We promptly found out that our idea was bland, uninspiring, and ‘what everyone else was doing’. I was reminded of receiving my first evaluation in the piscine (‘Alright, it’s fine, but this is all wrong’). Back to work we went; if the piscine had taught us anything, it was that failure is part of the process. You will not get it right the first time, or necessarily the second, or even the third. The old, pre-piscine me would have been stumped and dejected. Somehow, we were not, and we just threw out what didn’t work and seized on this one idea (“what if your food was a bomb...?”), and build something on the same theme, but a bit different, and a bit wilder.

In the end, our approach paid off. I did not realise it at the time, but our pitch and our idea caught the eye of the partner companies and earned us first place in the Sustainability challenge track for our Food Waste Defuser 3000. How did this happen? I think three things played in our favour, and they are all ultimately outcomes of the piscine and the ways of thinking Hive had nurtured in us already in the short time leading up to our participation in the hackathon.

First, we built a team out of very different people. Finnish and foreign, tech savvy as well as novice. We even had a bona-fide farmer. Far from a group of tech specialists, we were different and knew it, but the piscine had taught us that you can and must be able to work with people who are different from you. You cannot always choose who to work with, and being ready and able to explain yourself as well as listen to others is a strength. No one knew it all, but we all knew something.

Secondly, we had fresh perspectives. We had no preconceptions of what we were supposed to or able to do. We were not---and I am still not sure if I am in the strictest sense---tech people. Our backgrounds were very different from each other, and I suspect from many of the more seasoned hackathon participants. Part-time language teachers do not typically end up at hackathon events trying to come up with solutions to the problem of food waste. To borrow a cliché: we were not just thinking outside of the box; we were ourselves very much already living outside of it.

Third, and finally, we were open to new ideas and to learning. We were used to being confused and out of our depth from our experience in the piscine, and we were used to trying despite that disadvantage. When the partners told us that we could maybe go in another direction and try to do something different, we did not get defensive. In the piscine, you failed until you didn’t, and you became better for it.

While it was okay to ask for help and to be very, very lost on your way to getting somewhere, there was also the triumph when things finally worked, when you came by understanding by not giving up and trying a new solution when the first or second one did not work. This openness to help from your peers, combined with the self-reliance of taking responsibility for and ownership of your work, were probably one of the greatest lessons of the piscine. These lessons are much more important than any sense of readiness, and will follow us all into our continued studies and careers.